The Man at the Bottle Depot 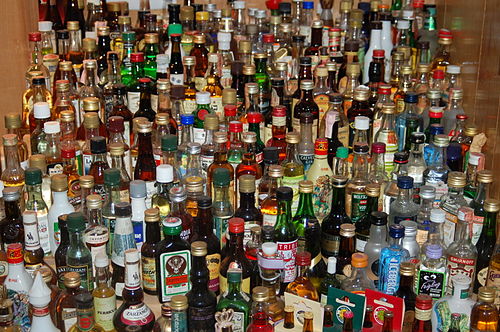 Liquor bottles. Scott Feldstein, Wikimedia Commons.
I was at the bottle depot one Sunday, recycling my empties, when I noticed the man. At first glance, there was nothing distinctive about him. He was middle aged, of medium build, dressed in unremarkable clothing. A trim, brown moustache divided his face. His voice had a raspy edge.

As he spoke to my neighbor in the recycling line, I heard a note of grievance in his remarks. He was speaking about the correct way—if there is such a thing—to transfer empty bottles and cans from a garbage bag to a sorting tray.

“It’s better to just dump them out,” he said. “It’s much cleaner and faster that way. Trust me, I know. I’m here every day.” This is when I glanced at the man to take stock of him. It wasn’t his words that interested me, or his lesson on bottle sorting technique, or even the raspy edge in his voice. It was the tone of grievance he used while addressing so inconsequential a matter.

He was perhaps fifteen years younger than me, a head taller, and much beefier. His clothes bore a greasy sheen. His hair was a dull bronze color, the shade you see on once-blond children who have lost their promise and luster as adults. It had the same oily appearance as his clothing. His eyes were puffy and swollen. His face had a dusky, reddish tinge.

An alcoholic, I thought, considering the man. How unfortunate. Mentally, I enumerated the ravages of this addiction—poverty, homelessness, ostracism, poor health, depression, low self-esteem.All this and more I could surmise from looking at him.

Still, the man at the bottle depot was a fellow human being. Like me, he had a need for acknowledgment and respect, and I saw no reason to withhold these things from him. I would pay him the courtesy of listening to his speech, as long as he didn’t carry on too long. No doubt he would be at my side at any moment.

When he arrived, however, I found myself less kindly disposed. “You people are all alike,” is how he began, and this opening phrase was enough to make my mind snap shut.

I reached into the sack to extract more of my empties, then stooped to the floor to recover some cans that had fallen there. It wasn’t a very dignified response. But I didn’t feel my dignity was the most important element in this encounter.

Some deficit in me prevents me from completely parsing people’s words at the moment they’re spoken. So I had trouble formulating a response right on the spot. Some further deficit prevents me now from recalling exactly what happened next.

My initial impulse to be polite had faded, but I don’t think I was explicitly rude. Passive-aggressive would be closer to the mark. I didn’t resort to profanity. I simply faced the man with a stony expression on my face. “Whatever,” I said, or perhaps, “I don’t care.” Then I turned my back on him and went on sorting my empties until he moved off to harangue someone else.

With more wit, I might have engaged this man on his failed opening line, that “You people are all alike” gambit. “What people?” I might have asked. Middle class people? Amateur recyclers? People who work at regular jobs, who live in apartments or houses? What do you mean by you people?

But none of these replies occurred to me until later. So I missed my chance to tell the man at the bottle depot that while alcoholism is an illness, prejudice is an offence. It’s wrong to assign other people to categories of your own creation, and then condemn them on that basis.

After I had placed my bottles in the sorting trays and launched them down the line to the man who counts them and hands out the money, I had one last encounter with the man with the dusky red face. “Hey, man,” he called out. “I didn’t mean no harm. Just trying to help.”

“Help me?” I might have asked, but didn’t. And: “To do what?” Help me unload my bottles? Help yourself recover a modicum of self-esteem? Or were you just firing another shot in the war between the haves and the have-nots?

Instead I swiveled my head briefly in his direction in a perfunctory gesture of acknowledgment. “It’s okay” I called back. “It doesn’t matter.” If the man in the bottle depot parsed my lines, he might have reached the interpretation that people like him don’t matter to people like me. That’s not quite true.

The man took me by surprise, sneaking under my radar to deliver a veiled and complex slur that tarred us both. To answer on the spur of the moment—to sift in an instant all those articles of politics, ethics, language, and class and deliver a solid response—was beyond me. Which is not to say that it doesn’t matter.

Where Your Feet Never Touch the Ground