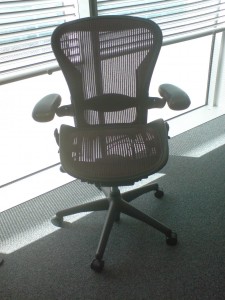 Last summer I had an experience that millions have had these last few years—I got laid off. I was working at the time for the Technical Publications department of a software company based in the San Francisco Bay Area. Word got out that the director of our department, a woman I’d never met, was coming to Calgary to visit our little outpost.

Preoccupied as I was with other business, I didn’t give this occasion much thought. Then a few days before the director’s arrival, we were told that she would meet for 30 minutes with the manager of our team, followed by a series of 15 minute visits with each other department member located in the Calgary office.

I suppose my danger detector should have lit up at that news, but it didn’t. The economy had improved, at least slightly. The company had weathered the recession. Salary increases were to be announced shortly.

I was so unruffled by this occasion that I overslept that morning. My only special provision for the day was to select one of my neater shirts and, illogically, underwear without holes.

Due to heavy rainfall and highway construction, I got to work about an hour late. Then I slipped out to the washroom shortly after my arrival and nearly missed my encounter with the director of our department. We met in the hallway and introduced ourselves. “Hi, are you ______? I’m Andy. Are we on now?”

This is what it feels like to be laid off. The room in which we met had bare walls, painted beige. It contained a faux wood desk and two chairs. The director of the department, a woman in her middle years, looked drawn and fatigued. Her hair was a shade of ginger. Her clothing was professional and nondescript. She wore glasses with a heavy tortoise shell frame, if I remember correctly.

I wasn’t concentrating on this woman’s appearance, but some of these details stuck anyway. She removed those glasses (I believe) and (perhaps) she wearily pinched the bridge of her nose. My memory might be deceiving me on these points. Then she told me that half the positions in our department were being eliminated, including mine. My last day of work would be August 19. After that, I would receive a severance package. It’s nothing personal, the director assured me, the company had been satisfied with my work. She would be happy to furnish a reference.

I’m not always calm and composed, but I was that day. I kept my voice low and steady. My hands remained folded in my lap. I asked the director who else would be leaving, then fished a pen and paper from my pocket to jot down the names. Of the people being laid off, some were senior to me, others junior. One of them was my boss.

The director told me how sorry she was to deliver this news. She handed me a folder containing the details of my severance package. She explained the rationale behind this decision and laid out her strategy for the department in the future. I told her that I was concentrating primarily on my own needs at that moment and didn’t feel terribly concerned about the future of a department that wouldn’t have me in it. We spoke for a few more minutes, then our conversation wound down. Standing, we shook hands, and I left the bare room with the beige walls.

My manager gestured to me that I should come to her office. She closed the door behind me, then we hugged and spoke for a few minutes. She was also being laid off. Then I returned to my office because the director was still relating her news to my coworkers, and I didn’t want to speak to them before she had finished. It was about 10:30 in the morning. Looking out through my open doorway, I saw one of my laid-off comrades stride stiffly towards the back door.

Later I went out to speak to my other coworkers, because I knew they had all heard the news by then. All were composed, both the ones who were leaving and the one who would stay. I spoke to other coworkers from outside our department, and they all commiserated with me.

I worked for the balance of the day, ate lunch, dialed in to a meeting at which the rest of our now rump department was informed of the layoffs. I tried to get a little work done and succeeded. I tried to think clearly and, at least in part, I also succeeded at that.

Later in the day, I met the director of the department in the lunch room. She looked even more drawn and fatigued than she had at the beginning of the day. I asked how she was and allowed that the day must have been stressful for her. Then I got on with the rest of my life.

My Foot on the Pedal of Progress