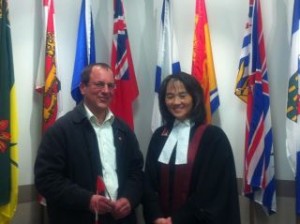 Shaking hands after the citizenship ceremony with Judge Joan May Way. Photo by Kate Dauphinee.

We gathered in a government office building on a Thursday afternoon, some 120 of us, from 30 different countries. It was as diverse a crowd as you will see anywhere—young and old, male and female, of every class and ethnicity. Some wore business suits, other hockey shirts and jeans. Looking on, you might have thought we had nothing in common, but we were in fact all in agreement on one point. We had all chosen to become Canadian citizens.

The room grew crowded and noisy as we waited for the ceremony to begin. Candidates milled about with their families. Children scampered underfoot. Many posed for photographs—the lectern was a popular spot, with the arms of Canada and a portrait of the Queen providing a suitable backdrop.

A few minutes after the hour, the court clerk came out and called us to order and explained the proceedings. There were a few ground rules, but nothing too strict. We should all stand when the judge entered and stand again to recite the oath. When called to receive our certificates, we should line up on the left and exit on the right. Photographs were welcome, but please don’t block the aisles while taking them. If your children grow restless, please take them outside to calm down, then return.

Judge Joan May Way officiated. A citizenship judge reviews applications for citizenship and decides if the applicants meet the criteria specified by the Citizenship Act and Citizenship Regulations.  Occasionally, judges meet with applicants before deciding on their applications. Citizenship judges render their decisions in writing and typically involve themselves in a variety of civic affairs, serving on school boards and community organizations. They also preside over ceremonies like the one I attended.

Judge Way is a petite, ebullient woman who conducts these administrative proceedings with infectious enthusiasm. Speaking both official languages, she made her remarks and led us through the oath in English and fluent French. She spoke about inclusiveness and multiculturalism as ways to strengthen Canada. Politicians often make such comments, sounding at times like robots mouthing official boilerplate. Yet Judge Way spoke with sincerity and warmth, evidently proclaiming her own deeply held beliefs.

Judge Way shared some of her personal history, which seemed tailor-made for someone who would eventually become a citizenship judge. Her father had immigrated from China in the 1940s. His journey was an occasion of hardship and family separation—Canada’s immigration policy, once tainted by prejudice, was far less liberal in those days, and he had been obliged to wait several years before bringing over his wife and their children. Once reunited, however, her parents had prospered in Western Canada and had several more children, of which Judge Way was the third.

Listening to the judge, I reflected on my own history. There were some obvious similarities in our stories. Her Chinese parents, and my Russian-Jewish great-grandparents, had both encountered hardship and prejudice in the New World—her family in Canada in the 1940s, mine in the United States in the late nineteenth and early twentieth centuries. If your family has been settled for generations, you might consider its immigrant origins part of the bygone past, never to be repeated. Yet humanity continues to wander at an extraordinary pace. In my family, I made a bit of history that day, for I am the first Kubrin to immigrate and acquire new citizenship in over a century.

Soon it was time to rise and recite the oath of citizenship, which I had hastily and belatedly memorized while riding downtown on the train. With my American background, swearing allegiance to a monarch seems like a peculiar thing to do. I’m used to an elected head of state, not a hereditary one. Some Canadians also find it peculiar, although they acknowledge the need for a figurehead and national symbol. In the end, many just shrug their shoulders and say, “Well, she’s a nice lady.”

The rest of the ceremony went by in a blur. Judge Way spoke of the diversity of the new citizens and alluded to the hardship many had undergone in leaving their countries behind. She voiced her satisfaction at the strength of the Canadian family, and as she did I glimpsed that old implicit hierarchy, so often unspoken: family, nation, state. This arrangement is far from perfect, of course. But we all have to live together somehow, and so far no one has found a better way.

Then our names were called and we filed past the lectern, clutching our flags, to shake the judge’s hand and receive our certificates and maple leaf pins. A feeling of lightness and serenity overcame me. Whatever citizenship means, it is clearly a promotion when you gain a new one. It’s easy to scoff at the kitsch of the modern state, but on this occasion I gave myself over to sentiment. When Judge Way welcomed us to our new family, my eyes grew cloudy.