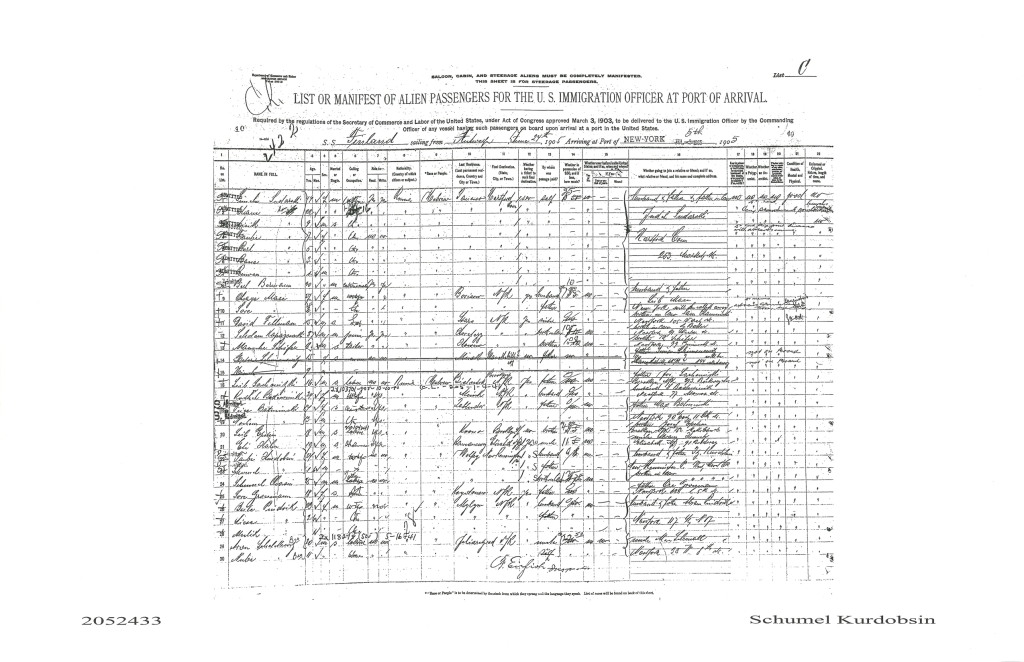 I never knew my great-grandmother was originally called Taube. I always thought her name was Tillie, the name she used most of her life, the name by which she is remembered today. But apparently I was wrong. I stand corrected now thanks to the record of her arrival at Ellis Island, which I located through the Statue of Liberty – Ellis Island Foundation. Taube, or Tillie, arrived on June 24, 1905, sailing on the S.S. Finland out of Antwerp, like her husband Chaim Kurdabrin before her. That’s Taube on line 22 in the image above. Her son Schmuel (later Sam) is on line 23. He became my grandfather. 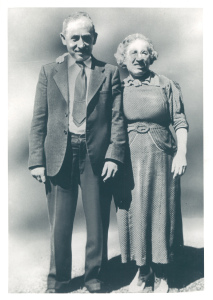 Taube was 24 years old when she immigrated, which would make her two years younger than her husband. The manifest gives her occupation as wife. I’d like to see a captain or purser make such a designation today. Her town of origin is given as Wolpa, her destination as New Kensington, Pennsylvania. Her stateside contact was her husband, which I suppose makes sense for a woman whose occupation is wife.

With her babe in arms, Taube disembarked that day to greet her husband, whom she had not seen in two years. They greeted one another (or so I imagine) with curt nods because dockside kissing was not in vogue in their day and they were in any event not a passionate couple. Then Chaim examined his son, whom he had never seen before. With relief, he noted the boy had his hair, eyes, nose, mouth, and chin. That was good luck. Tillie had many fine qualities, but comeliness was not one of them.

Actually, we are hard-pressed today to recall any of Tillie’s good qualities. Physically, she was hard-faced and imposing, a dour, jowly woman with a massive, stony bosom and a coif like George Washington’s. Her personal qualities were apparently no more appealing. Besides her ugliness, Tillie is remembered for her sternness and browbeating and the meticulous attention she paid to family life—in particular, to her daughter-in-law’s purity and fertility. When young Samuel married years later, she accompanied the couple on their honeymoon and somehow cajoled my grandmother Rae, herself a woman of iron will, into taking the mikvah, or Jewish ritual bath. These interventions were apparently more important to my great-grandmother than the progeny they were meant to produce. In time, Rae delivered herself of four charming grandchildren—three sons and one daughter, for whom Tillie gave off not one iota of affection.

I don’t have much to go on in producing this portrait of Tillie—just one photograph and a few memories handed down from others. My grandparents are gone. My father and Aunt Phyllis are gone. My Uncle Jay remembers Tillie, which explains the mocking tone of the recollections in the last paragraph. It also explains the slant of these recollections, which he undoubtedly received from my grandmother. That would have been a natural occurrence in my family. I’ve never asked my Uncle David about Tillie, but I should. He might be able to help me round out this portrayal. 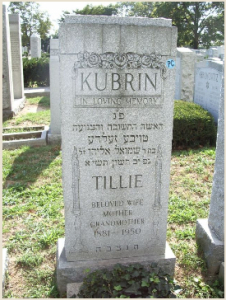 I like the satirical tone of this portrait, but not its one-dimensionality. It’s not nice to make fun of someone’s looks, but ugliness is an endearing human quality, rich in comic possibilities. I’m amused at the thought of an overbearing mother traipsing along on her son’s honeymoon—if ever there was a time to stop chaperoning, the honeymoon would be it. The details about the mikvah and Tillie’s obsession with my grandmother’s fertility complete this sketch of a control freak, which is heightened by her complete indifference to actual grandchildren.

Still, I wish I knew more about Tillie. I’d like to follow the arc of her life over the decades, to trace the ways in which America and family life changed this woman. Her gravestone bears the inscriptions In Loving Memory and Beloved Wife, Mother, Grandmother. Are these words merely perfunctory, or do they belie the affection our most difficult relations somehow elicit in us all?