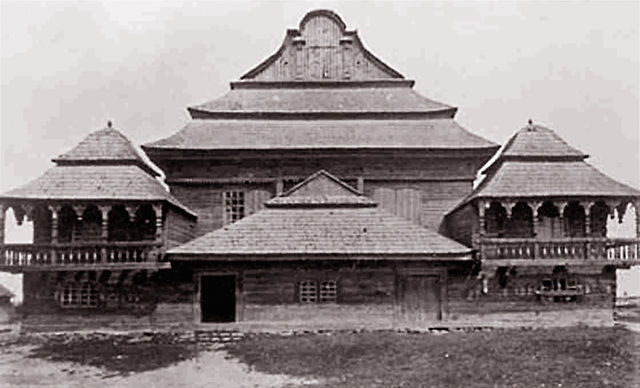 Wooden synagogue in Volpa, circa 1920. Public domain via Wikimedia Commons

 My great-grandparents Harry and Tillie Kubrin came from a town called Volpa, which in their day was part of the Russian Empire. Nowadays it is called Voupa, or Woupa, and it is part of Belarus. How you identify this place depends on where you locate it in the long view. Over the centuries, Volpa has belonged to Lithuania, Poland, and Russia, in addition to Belarus, and it has been known by its Russian, Yiddish, Polish, and Belarusian names, which are rendered in English as Volpa, Volp, Wołpa, Voŭpa, and Wolpa. The purser who boarded my great-grandparents on the S.S. Finland entered this name on the manifest as Wolpy. This swirl of place names hints at the area’s history of conquest, and it makes for confusing research. If you like certainty and order, genealogy might not be for you.

I first spotted the reference to Volpa in my great-grandparents’ burial records, which my cousins Damon Yoches and Kristy Kubrin located in the JewishGen Online Worldwide Burial Registry (JOWBR). According to these records, my great-grandparents’ graves are maintained by the Volper Young Men’s Benevolent Society—an offshoot, I later learned, of a Lower Manhattan synagogue called Beth Hamidrash Ahawath Achim Anshe Wolpa We-Most, or Brother’s Love School of Volpa and Most. (Most is a small village about 20 km east of Volpa.) The Benevolent Society purchased burial plots at the Mt. Zion and Beth David cemeteries in New York. My great-grandparents are buried at Beth David. 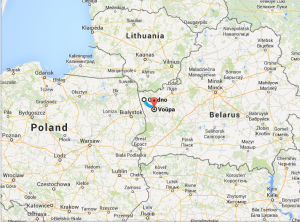 No matter what you call Volpa, my ancestors did us a big favor by getting out of it. The town is 100 km east of Bialystok and 55 km southeast of Grodno. The map at left gives you an idea of where it is situated. Volpa was one of the principal towns of Grodno-Gobernia, which was a unit of government like a province. The gobernia has a mythic resonance in our family history. My grandmother called us Litvaks, emphasizing the area’s original connection to the Grand Duchy of Lithuania. My father joked about Grodno-Gobernia, referring to our ancestral homeland with a mixture of mockery and pride.

The earliest inhabitants of the area were Slavs, who arrived in about the ninth century. Jews began settling there during the 14th century, invited by Prince Alexander, or Witold, “Grand Duke of Lithuania and ruler of Brest, Dorogicz, Lusk, Vladimir, and other places.” A Prince Holshinsky also encouraged Jewish settlement in the 16th century, hoping to spark economic growth through the newcomers’ enterprise and skills. Many were artisans or merchants. Others farmed. Still others were tax collectors. Relations with the nobility were at times cordial, at times strained. Ellen Sadove-Renck provides a detailed treatment of the area in History of Grodno.

The Swedes invaded Volpa in 1656 and sacked the Jewish quarter. The Jews rebounded, building a magnificent wooden synagogue in the late 17th or early 18th century. The choice of wood had nothing to do with aesthetics or economics, nor was it dictated by the availability of materials. Beset by discriminatory laws, Jews operated under a host of constraints, including one that prohibited them from building in masonry. 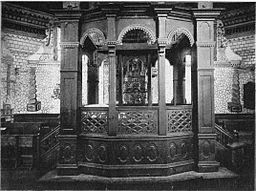 Bimah of the Volpa synagogue. By Mathias Bersohn from Wooden Synagogues in Poland. Public domain via Wikimedia Commons

They built a masterpiece in spite of the limitations of the material. The hall was 13 meters square, the walls 7 meters high—one of Europe’s largest wooden structures. Multitiered roofs gave an impression of grandeur. Pavilions adorned the corners, with balustrades and balconies enhancing the effect. Within the sanctuary, vaulting rose in three tiers to a height of 14 meters, with each tier set off by an elaborate balustrade. Four wooden columns rose from the bimah to support the roof. The ceiling was painted dark sapphire, with gold stars heightening the mystery of the vault. The ark was made of carved and painted wood, decorated with menorahs, the tablets of the Ten Commandments, towers, floral swags, and an eagle. When Grodno-Gobernia was ceded to Poland, its parliament declared the synagogue an artistic treasure.

By the end of the 18th century, Russia had annexed the area, granting autonomy to the Jews. Most lived from farming in that era, growing vegetables, fruits, and tobacco on land leased from Christians. Others engaged in commerce and the crafts. The town grew to support two tanneries, a dye works, and a brewery, although the lack of a rail line held industry in check. The population reached about 2,000 people, around half of them Jewish. The community ran a cheder, or Jewish elementary school, and two high schools (Bet Midrash).

During and after World War I, the German, Russian, and Polish armies marched across the land. Hunger set in. My great-grandparents had left for the United States by then, so they didn’t experience this hardship. After the war, the region was again ceded to Poland. The Polish government quartered troops near the town, prompting anti-Jewish activities. Punitive taxes, and a prohibition on the tobacco trade, drove many Jews from the area in the 1930s. For those that remained, Zionism grew ever stronger in its appeal.

On September 1, 1939, Germany invaded Poland, touching off an era of unprecedented horror. Under the Molotov-Ribbentrop Pact, the Russian army occupied eastern Poland, including Grodno-Gobernia. ShtetlLinks: Volpa would have us believe that “life went on with only reasonable modifications,” but I find this idea doubtful. Josef Stalin was not one to govern with a gentle hand.

When Hitler continued his eastward march, conditions turned dire. ShtetlLinks: Volpa summarizes the testimony of a survivor named Itzhak Vodovoz; together, they tell a dispiriting tale. On June 21, 1941, the Luftwaffe bombed Volpa. Fire leapt up and raced through the shtetl, engulfing houses, cheder, and wooden synagogue; and unlike the spirit flame at Mount Horeb, this one did consume. German troops arrived in July. Jews were ordered into shelters, prohibited from rebuilding their burned-out homes. A Judenrat was formed to press-gang labor for the Germans.

These indirect methods did not satisfy them for long. On November 2, 1942, the Jews were ordered to assemble in the town square with their belongings. A debate ensued, but the Jews decided to appear as ordered, fearing the alternative would be worse. Two young people ran away. The Germans threatened to kill fifteen people for every escapee, but the Judenrat dissuaded them. A group of Germans and local Poles hunted down the rabbi of the wooden synagogue, Mordechai Segal; first they cut off his beard and then they killed him. One of the Poles from this group denounced Vodovoz to his employer, a Christian. Finally, German soldiers ordered the Jews to abandon their belongings and march to nearby Wolkowysk, where 2,000 other Jews were assembled from Wolkowysk and nearby villages. Sixty-six elderly and infirm people who could not march were murdered that day.

The Germans began transporting the Jews to Treblinka, one village at a time. There were about 900 from Volpa; they were transported last, three days before Hanukkah. A few escaped en route to the concentration camp, but they were captured by Polish partisans and handed over to the Germans. Itzhak Vodovoz escaped by hiding in a wagon transporting bodies to the cemetery. He managed to arm himself in the woods and took revenge on the Poles who had turned on the Jews in Volpa. Later he joined Soviet partisans in the woods at Kalbaniza, then the Red Army. After the war, Itzhak Vodovoz immigrated to Israel and settled in Petah Tikva. He was Volpa’s sole Jewish survivor.

My great-grandparents surely knew the wooden synagogue. They must have prayed there themselves. Although they left Volpa at the turn of the century, it is virtually certain that some Kurdabrin relatives remained behind and perished in the Holocaust. During the war, and afterwards, my great-grandparents must have waited in vain for word from their kin, finding confirmation of their worst fears in the letters that did not come. They probably never told my grandfather about Volpa, so he never told his children, and they did not tell me. In families, many things are left unsaid, sometimes for good reason.