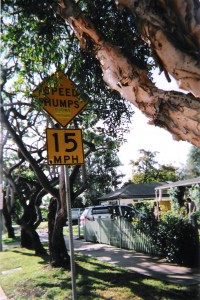 My mother and I had long planned to visit the house on North Harper on my next trip to Los Angeles. I was eager to see the site of the accident that took the life of David Lipsy. I thought seeing this place would help me understand the accident. I wanted to see the position of the house, its distance from the curb, and the visibility of the street to oncoming traffic. My mother must have approached this visit with some trepidation. The house on North Harper, after all, does not hold happy memories for her.

We drove there on a Sunday morning. We stood for a moment on the sidewalk, sizing up the situation. I held a camera,  recorder, and a notebook. The front yard was minuscule and unfenced. It held a fig tree with dark, knobby branches, which my mother remembered climbing as a girl.

Just south of my grandparents’ house there was a speed bump and a 15 MPH sign: David’s monument. The street was narrow, with barely room for one lane of traffic. It had a dogleg bend right in front of the house, which would have limited a driver’s view. Any child dashing out from between parked cars would not have stood a chance.

My mother remembers Harper Avenue as a close-knit place. Evidently it’s still that way. While we were loitering, an older woman approached, wanting to know our purpose in her neighborhood. When we explained the reason for our visit, she nodded warmly. The current owner of the house was only away for a moment, she assured us, and he would be glad to help us.

She was right on both counts. The owner, a man named Peter Mayer, came along a few minutes later. He was in his early fifties, soft-spoken and friendly. When we told him the reason for our visit, he quickly invited us in. We were in luck, and doubly so. Peter had known the house since his early childhood, when his grandparents had owned it. In fact his grandparents had bought the place not long after mine had moved out.

Apologizing for his housekeeping, Peter Mayer opened the front door. As my eyes adjusted to the light, I made out a dim, unkempt place with clothing draped over the furniture and unfinished projects strewn across tabletops. The windows were filmy. There was an accumulation of dust.

His grandparents had changed little about the house, he explained. Pausing at a built-in cabinet near the entrance, he tugged open a drawer, then bent forward and breathed in the fragrance of the woodwork. “You might remember this,” he said to my mother, and remember it she did—with a sense of wonder and astonishment. “The bathtub is original, too,” he said, leading us to the bathroom, and this sight elicited another exclamation from my mother. Indeed, she remembered that tub as well. She had bathed in it as a little girl.

As we left, my mother seemed at once animated and relieved. She thanked me for helping her open this door to her past. She hadn’t seen, or perhaps even thought of, the house on North Harper Avenue in decades. My mother is a sincere person, if somewhat guarded, so I assume her words reflected more or less what was in her heart. Unless, of course, her feelings that day were so complex as to be inexpressible.

When I returned from L.A., I found one last disappointment waiting for me. Before leaving on my trip, I had contacted the Los Angeles Police Department in the hopes of finding a police report of the accident. From the Times and Examiner articles, I had by then learned the name of the driver (George Warren Beggs) and the disposition of the case (Mr. Beggs was not found culpable in the accident).  But I was still eager to see the police report, for it would tell me at least one thing the newspaper articles did not divulge: the direction of his approach, which would have revealed his view of the street.

But this last effort bore no fruit. Despite the provisions of the California Public Records Act under which I had filed my request, this report was deemed to be unlocatable. The record, if it existed at all, would be buried in a mountain of paper. Police reports were filed by serial number, with no connection to their date or the location of the incident. On these grounds, the LAPD denied my request.

I was frustrated at this setback, but not as demoralized as I had been over my initial failure to locate my uncle’s certificates of birth and death. I had found David at last, and he wouldn’t be lost again.