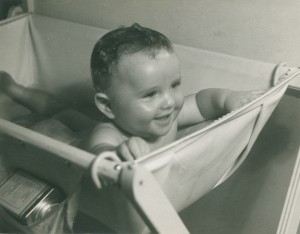 One of the most difficult tasks I’ve faced in researching my family history has been to trace the brief life of my uncle David Lipsy. As I mentioned in another blog post, I had trouble finding any documentary evidence of David’s life because my mother could not remember when he was born or when he had died. Without these dates, my inquiry with the Los Angeles County Registrar-Recorder/County Clerk failed to return any results.

There are moments when  family research stirs your emotions in unexpected ways. This was one of them. I felt a terrific pang of disappointment when I learned that the registrar-recorder’s office could not find David Lipsy in its files. This was far worse than a case of missing paperwork—it was as if my uncle had abruptly vanished. I realized then that my research had taken on the character of a rescue attempt, and a supernatural one at that. I felt as if I were trying to pull David back from the land of the dead.

Then one day I spotted an ad for ancestry.com on the Internet. Following the link, I registered for an account and queried the ancestry.com databases for traces of my lost uncle. Within moments, my query returned records from the California Birth Index and the California Death Index.

David, I learned, was my uncle’s middle name. His full name turned out to be Louis David Lipsy—he was named after my great-grandfather, Lou Lipsy, who died just two months before David was born. But no one ever called my uncle Louis. People called him David, when they called him by any name at all. Most of the time, though, people just called him “the baby.”

That’s a fitting term for someone whose life was so short. Born on January 24, 1940, David died on April 30, 1942 when, with a toddler’s joyful abandon, he ran into the path of an oncoming car. I had always known that my uncle had been struck by an automobile. This fact was part of our family lore. I also knew the location of this accident, which was on North Harper Avenue, because my mother had no trouble remembering her childhood address.

Knowing my uncle’s full name, as well as the dates of his birth and death, I filed a second request with the Los Angeles County Registrar-Recorder/County Clerk. This time the clerk easily located his certificates of birth and death. The birth certificate held little information of import. The death certificate confirmed the circumstances of the accident but added one grisly particular: The precise cause of my uncle’s death was a ruptured liver.

On my next trip to Los Angeles, I decided to learn as much as I could about David’s life and death. My first task was to visit the Los Angeles Public Library. I knew the local papers would have covered David’s accident, and now that I knew the date of the accident, it was a simple matter to scroll through the microfilm and find the stories.

The Los Angeles Times and the Los Angeles Examiner (now defunct) both covered this tragedy. Both papers misspelled my uncle’s name—the Times used the name Litsey, while the Examiner had it as Lipsey. From the Times, I learned that David died a few minutes after the accident. From the Examiner, I learned that my horrified grandmother had been watching helplessly as her child rushed in front of that car. This last detail only heightened my sorrow. I can’t imagine what my grandmother must have felt at this sight, or how she ever got it out of her mind.