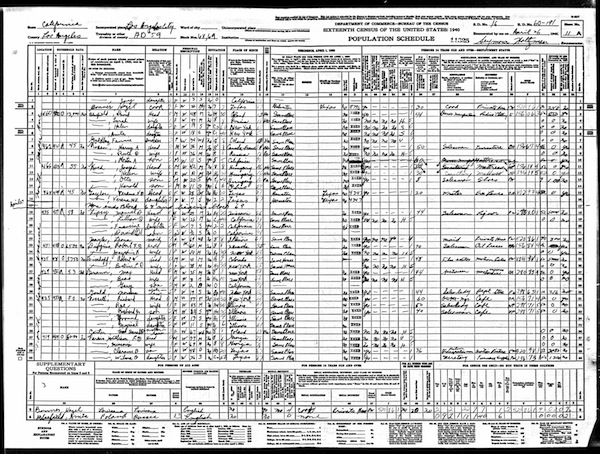 I’ve been concentrating on oral history lately, typing up interviews from my endless transcription backlog. As a result, genealogical research has been on the back burner. But when I received an Ancestry.com email advising me of some possible matches in the 1940 census, I was intrigued. So I logged onto Ancestry to see what it had found.

I wasn’t expecting great revelations from the 1940 census. I already knew where my relatives were living that year. But the early 1940s were extremely important in my family, particularly on my mother’s side, so I was eager see what details the census contained. 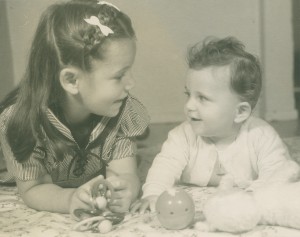 My grandfather, Manuel Lipsy, was 29 years old in the year of the census. My grandmother, Lillian Lipsy, was 26. My mother was seven years old, a bright girl in the second grade at nearby Rosewood Avenue Elementary School. My Uncle David, whose brief life I have written about here and here, was just 2 months old. My Uncle Ron had not yet been born. He came along four years later.

The census taker’s name was Seymour Holtzman. He visited my grandparents’ house on April 26, 1940, a Friday. I haven’t found a weather report for that day, but it was probably fair. Los Angeles being a paradise of the mind, it is easy to imagine it as a paradise in fact. Let’s assume the day was sunny and mild, with a faint humidity borne off the ocean.

Los Angeles in the 1940s also resembled paradise in that it had a cheap and plentiful supply of domestic help. I was surprised to learn that my grandparents already had a live-in maid at that stage of their lives: Mrs. Leona Mayle, a widow of 64 years, born in Illinois. According to the census, she had been with my grandparents since at least 1935. The house on North Harper Avenue is a tiny little bungalow. With three adults and two children, I imagine things were cramped.

Mr. Holtzman walked north on the east side of the street, visiting the Atkinson, Guenther, and Molander families. He stopped at No. 458 and called at my grandparents’ friends, the Hertzes, where he counted Thomas and Mary Ruth Hertz and their children Lawrence and Joy. Ruth Hertz, a woman with grave, watchful eyes, was one of my grandmother’s best friends. Continuing north on Harper, Mr. Holtzman stopped at the Bluefield, Rosen, Koch, and Taylor residences, then crossed the street at Rosewood Avenue and began walking south on Harper. On the west side of the street, his first stop was at No. 455, my grandparents’ place.

I suppose my grandmother would have answered the door that day. I don’t believe she would have delegated that task to Mrs. Mayle. An immaculate woman, she would have been well coifed and fashionably dressed. Sociable and vivacious, she probably answered the door with good cheer and a dazzling smile. I like to think my grandmother held my Uncle David in her arms, and that Mr. Holtzman paused to smile at the baby and deliver himself of a compliment. David didn’t have a chance to meet many people in his short life. I hope he met Mr. Holtzman.

After enumerating my grandparents and their children, Mr. Holtzman continued south on Harper Avenue, visiting the Diggins, Bischoff, Brann, and Rossell families. Although no one realized it at the time, the year of the census marked a zenith in the life of the Lipsy family, at least in that era. My grandparents were still youthful, rising in wealth and social status. Their first two children were alive and thriving. My grandmother kept detailed baby books and snapped many photographs. Her children made her happy.

Two years later, my Uncle David ran onto North Harper Avenue and perished beneath the wheels of that automobile. While his death did not cause the misfortune that plagued my mother’s family, it certainly intensified it. The following years witness, despite the birth of my Uncle Ron in 1944, the disintegration of my grandparents’ marriage, my grandfather’s drinking and philandering, and my grandmother’s panic attacks. These troubles also prefigure, in later years, my grandmother’s angina, heart attack, and eventual demise from Alzheimer’s disease.

I don’t want to give you the impression that my grandparents went into an unremitting decline after my uncle died. Far from it, in fact. While their burdens were heavy, their strength and resilience were also considerable. Mustering their resources, they stepped back from the abyss and once again led fruitful lives. If my grandfather was quarrelsome at times, he could also be charming and bright. He read deeply over the decades, developing an appreciation for politics and history. He also tinkered incessantly, laying bricks for an outdoor barbecue and hatching schemes for sentry robots, mechanized parking garages, and hydroponic gardening. In his own crabbed and peculiar way, he was a visionary.

My grandmother found another way back from the brink. It wasn’t easy at first. She had to overcome panic attacks, which left her helpless in public settings. Strangers would drive her home and deposit her on the doorstep, ashen and trembling. Worse still was grandparents’ attempt to suppress their grief. After David’s funeral, they rarely spoke of him, except in passing references to “the baby.” My mother remembers hearing my grandmother sigh, saying “Today would have been the baby’s birthday.”

Eventually she went into therapy, although it’s not clear how much the psychoanalytical methods of the time were helpful to a woman suffering from an unhappy marriage, guilt, and PTSD. Still, the therapy was useful in an indirect way. If nothing else, it gave her a chance to talk and express her true feelings. It also led to volunteer work at the psychiatric clinic, which led in turn to a vibrant career at UCLA. More than anything, work restored my grandmother. It gave her self-confidence and a sense of competence.

A census is a collection of data, put to mundane use. It takes a distant view of a population. But when you take a closer look at the people behind the data, a census can help you tell a rich human story.

Census experts, I need your help.

In the 1940 census, between columns 19 and 20, there is a column D marked “Code. Leave blank.” Nearly every space in this column is stamped XOXO. A few spaces have handwritten numbers.

What is the significance of the XOXO stamp?

What do the handwritten numbers mean?