Where Your Feet Never Touch the Ground

Like many northern cities, Calgary has made provisions for residents who wish to avoid its harsh winter climate. Montreal has its underground city. Toronto and Minneapolis have their skyways. Calgary has a similar network of elevated bridges, the Plus 15s.

Calgary’s +15 walkway system has the distinction of being the largest network of elevated skyways in the world—over 16 kilometers, or 9.9 miles, of enclosed bridges connecting the towers of its downtown core. There are 59 of these bridges, all at a nominal height of 15 feet above the pavement. You can locate a +15 walkway just by looking for the man with the white cowboy hat: 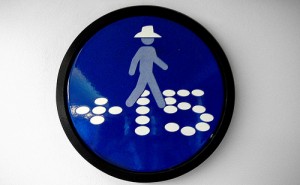 The white cowboy hat is a big deal around here, but that’s another story.

If you live or work downtown, you can reach almost any destination in this network, travelling by bridge from Second Ave. SW to Tenth Ave. SW, or from Third St. SE to Ninth St. SW. A map of the system highlights its convenience for the downtown business community and its corporate citizens. Without going outdoors, you can walk from the Chamber of Commerce to AMEC Place, passing through the Suncor Energy Centre, the Stock Exchange Tower, Canada Trust, the Petrogen Building, and Bantrel Tower, to name just a few local landmarks. You can also easily reach the TransCanada Tower, SunLife Plaza, Chevron Plaza, and the Shell Centre, should you have business to do at any of these locations.

Calgary’s elevated walkways are the brainchild of Harold Hanen, an architect and planner who worked for the City from 1966 to 1969. Hanen, a native Calgarian, was a man of energy and distinction. He studied at McGill University, then apprenticed with Frank Lloyd Wright. Following his apprenticeship with Wright, Hanen studied architecture and urban planning at the Boston Architectural Center, Rhode Island School of Design, and Massachusetts Institute of Technology.

Hanen had a particular interest in what he called winter cities—urban centers with an average January temperature of 0°C (32°F). He believed that such cities must overcome the strictures imposed by climate in order to flourish or grow in influence and importance. The +15s were his response to six months of cold, snow, and ice—a way to cope with winter by avoiding it.

As a follower of Frank Lloyd Wright, Hanen used architectural form to build a connection between human beings and the environment. The glassed-in corridors of the +15s admit abundant light, and they provide striking views of the urban landscape—the view downward onto the Third St. SW C-Train station, for example, offers dramatic perspectives and jutting, angular shapes. Yet there is a certain sterility to this perch. Carpet, steel, and glass afford little warmth. If the architectural elements are bold and assertive, the human presence there is muted.

Still, there is no doubt that the +15s make pedestrians feel comfortable and secure. Even in December, as I write this post, the walkways are free of snow, ice, and biting wind. The cacophony of the streets is inaudible. The air is neutral in scent. The ground is free of puddles, chewing gum, dog shit, and broken glass. You could pad around here all day in your bedroom slippers.

Hanen encountered opposition from critics, who felt that a system of overhead walkways would rob downtown streets of their vitality. He persevered in his efforts, however, and saw construction of the first +15 in 1970—a skyway spanning Fourth Ave. SW and connecting Calgary Place to the Calgary Inn (now the Westin Hotel). Hanen won the 1970 Vincent Massey Award for Merit in Urban Planning for his innovation. Since then, the system has grown apace, fueled by bylaws that provide tax credits to building owners and developers connecting to the existing system.

In our globalized age, when people dial in for meetings from Stockholm, Bangalore, Damascus, and Beijing, the notion of physical proximity seems almost quaint. It’s no longer necessary for the executives of TransCanada and Imperial Oil to conduct business face to face. Yet the City’s ongoing support for the system suggests it still serves a vital purpose, which is at least partly economic. The +15s lead office workers to retail malls, food courts, and kiosks selling magazines, sundries, giftware, and cell phones. There are travel agents, drugstores, jewelers, doctors, dentists, cafés, and, surprisingly, shoeshine stands—a peculiar enterprise in a place where your feet never touch the ground.

The tensions inherent in built environments—between aesthetics and economics, between environment and artifact—lie at the heart of the +15s. The cool, sterile atmosphere that prevails in those corridors is at odds with the vision of their creator. Harold Hanen strove for a livelier scene, with shops and cafés encouraging human interaction. His widow, Maria Eriksen, quoted in Alberta Originals by Brian Brennan, said, “He felt it should be a much more dynamic part of our city, it shouldn’t be another street.” But that’s not how things turned out. Instead, the +15s evolved into impersonal corridors that merely funnel people from one place to another, like pedestrian freeways.

Unlike conventional roadways (and sidewalks), the +15s are private property. The walkways are part of the buildings to which they are attached, and they are owned by the developers who constructed them. Most +15s close at 5:00 p.m. and remain closed on weekends. Private ownership also effectively restricts access to those having business on private property—a middle class community of office workers and shoppers. Drunks, the homeless, the insane—these are people you rarely encounter in the +15s. For that matter, you hardly ever see children there, either.

But during business hours, those corridors are dense with human traffic. Within the economic strata defined by the private ownership of the walkways, I see a diverse crowd of men and women of every ethnic grouping. People hurry past, thumbing electronic devices or bearing their lunches in styrofoam clamshells. Judging by facial expressions, a representative microcosm of humanity is assembled here. I see boredom, friendliness, pleasure, satisfaction, resignation, and concealment, all in muted degrees. Some wander in a fog. Others are alert and sensitive to gaze. The degree to which one can remain aloof in such a densely packed space underscores the paradox of crowds. The +15s are a good place to go when you want to be alone.

What is more, the people here are attractive. Most are well-groomed and well-dressed and bear themselves with confidence. I see men moving with a sense of power and ambition. I see sleekly beautiful women. Striding by the shops, I see all the shiny doodads and frippery our economy produces for consumer delectation, even in hard times. Perhaps I am drawn here for the oldest reason of all. Walking through the +15s, I feel desire.

Occasionally, the larger world intrudes, reminding me that life in general is not so orderly. One day I see two drunken Aboriginal men weaving down the skyway that crosses Ninth Ave., heading to Palliser One. A trim looking man in a blazer eyes them suspiciously. Ostensibly a janitor, he is operating a carpet sweeper, but he has a sharp-eyed look that suggests he is responsible for more than carpet cleaning. The two drunken men stagger past, headed perhaps for the grittier world of the streets below. They have the gleeful look of joyriders.

Yet sometimes the vanquished do take refuge here. The day after a snowstorm, when the temperatures dip to just below freezing (a mild day around here), I encounter a homeless person in the system. Crossing Seventh Ave., I see the downbeaten man seated on the carpeted bridge, bearing a crudely lettered sign. “Homeless. Hungry. Anything Will Help.” His face has a waxy, dented look, and angry red sores stand out on his cheeks. Perhaps he is an addict. Scores of people stream by, paying no attention to the man.

But I circle back and give him all the change I find in my pockets, about $5 in loonies and toonies. It’s not my usual custom, and only later do I understand the reason for my action. I am studying the +15s and the people who inhabit them. My interest in the man is voyeuristic. Putting him on exhibit, as I am doing now, is an act of appropriation like pinning a butterfly to a collection board. The man has earned his alms.

Then I’m in The Core, which is well-lit, fragrant, massively crowded, and packed with luxury goods. The aroma of the food court wafts down, exciting my appetite. Smartly dressed shoppers criss-cross my path, toting their swag. In shop windows, I see swanky winter coats, piles of jeans, sweaters in soft cashmere, thick chocolates, and smartphones.

Pausing at a balustrade, I look down to see EMS techs wheel a man out on a gurney. One doesn’t dwell long on such unpleasantness in such opulent surroundings as these. At the Guess store, in a giant photo adorning the window, a cowboy and a Marilyn look-alike lean in for a kiss. Where else but a mall can you find such a peculiar mix of oblivion and power, desire and forgetting? How shrewd is it to build a system of walkways that connects the place where you get your money with the place where you spend it?

After my circuit through The Core, I return to work by the same path that brought me to the mall. The homeless man is still seated on the walkway, looking  as abject, forlorn and out of place as he did before I laid a pile of change on him. It’s only a matter of time before the security guards come and escort him to the exit. The +15s demand this protocol. The categories and boundaries they assert—us in here, them out there—are ancient. But like every act of assertion, this one calls itself into question.

The Audience in My Head