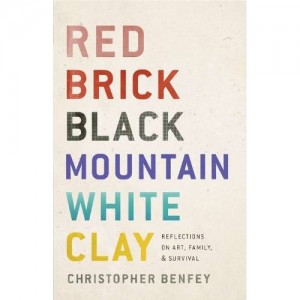 As I move more deeply into the effort of writing a family history, I find myself reading more widely in the genre. You can’t work without taking stock of the precedents in your line. To write a family history, I have to come to grips with the genre itself, to learn lessons from those who have come before me and to keep up with current offerings. So today I set up a new blog category, Readings, to capture my thoughts on other family histories. Christopher Benfey’s Red Brick, Black Mountain, White Clay is the first entry in this category. There will be others.

If family history is an enterprise of middle age, Christopher Benfey takes a typical approach to the genre. A profesor of English at Mount Holyoke College, he finds himself at fifty-four increasingly subject to “the magnetic pull, stronger every day, of retrospect.” In his case, there is a great deal to look back on. Benfey sits at the confluence of a unique mingling of family waters. On his father’s side, he descends from German Jews, with the Ullstein publishing dynasty, the artists Josef and Anni Albers, and the philologist Theodor Benfey all in his line. On his mother’s side, he descends from Quakers, less socially prominent but deeply rooted in the American landscape, with ties to farming, brick making, botany, pottery, and porcelain. It’s a diverse lineage, one that prompts rumination on any number of subjects.

This diversity poses a challenge in Benfey’s history. Facing such a wide variety of characters and enterprises, he seems hard-pressed at first to tie it all together. Early chapters read like fragments, only loosely bound by narrative or thematic ties. Gradually, though, the account gathers force. Connections form between the Jews and the Quakers, the farmers and brick makers, the artists and the folk potters. A portrait of a scarred, struggling, yet deeply tenacious family emerges, one that draws on deep reservoirs of intellect, artistry, and craft to survive.

Reviewers and bloggers have looked favorably on this book. Carole Epp, writing at musing about mud, was fascinated by Benfey’s “journey of discovery” to Germany, Mexico, Japan, and England, and enthralled by his meditations on Black Mountain College, Bauhaus aesthetics, creativity, survival, and the search for the perfect clay. Kay, writing at the infinite curio, praises the intimacy of the book’s perspective, noting that it “makes history sound a lot more personal and a lot less clinical, all while sticking to the facts.”

These bloggers both note, as I did myself, Benfey’s prolific name dropping. Turning these pages, I encounter passing references to Walter Benjamin, Randall Jarrell, John Cage, Willem de Kooning, James Madison, Alexander Hamilton, and Thomas Jefferson, all of whom had at least tangential contact with Benfey’s ancestors. If that isn’t enough to fascinate you, there are also accounts of his forebears’ interactions with Heinrich Heine, Horace Walpole, Josiah Wedgewood, Diego Rivera, and Charles Olson.

The inclusion of these names does not feel forced. Benfey has solid reasons for placing them in his narrative. The first is that these renowned figures exerted a genuine influence on Benfey’s family, leaving lasting impressions on his ancestors. Character is both an acquired and inherited trait—acquired along the way from those who touch our lives, and inherited in the legacy of experience that accumulates in a family through the generations.

The second reason has to do with grounding the family narrative, making it seem solid and real. Reading accounts of other people’s ancestors, it is easy to question the reality of the characters you encounter. A parade of unknown scholars, traders, artisans, teachers, and farmers passes before your eyes, and because they are unknown to you, it is easy to dismiss the fact and significance of their existence. Including historical figures in your narrative dispels this effect. Those famous figures vouch for your relatives.

I find name dropping irresistible. Although fewer historical figures intersect with my line than with Benfey’s, I nevertheless find reason to include Joseph McCarthy, Roy Cohn, and G. David Schine, or Douglas Fairbanks (both Sr. and Jr.), Daniel Ellsberg, Stokeley Carmichael, and Richard Feynman. Even Isaac Newton puts in an appearance. I don’t think it’s gratuitous of me to include these names in my family history. I don’t overplay the significance of these cameos. In some cases, my relatives knew these figures; in others, they saw them from afar or simply felt their influence. Such is the history of ordinary people.

Benfey’s work is not an exact model for my own. He doesn’t delve deeply into character in some cases, and he doesn’t seek out the comic or absurd moments in his family chronicle. But his work fits nicely in the genre of microhistory I explored a few weeks ago. He makes the most of his research, using factual material to create a satisfying portrait of his family and its times. Connecting the disparate strands of his family past, he imbues that portrait with significance, a project that is often only possible in retrospect. The meaning that emerges in that backward glance is the gift of memory.

Do historical figures appear in your family history? How do you treat them?