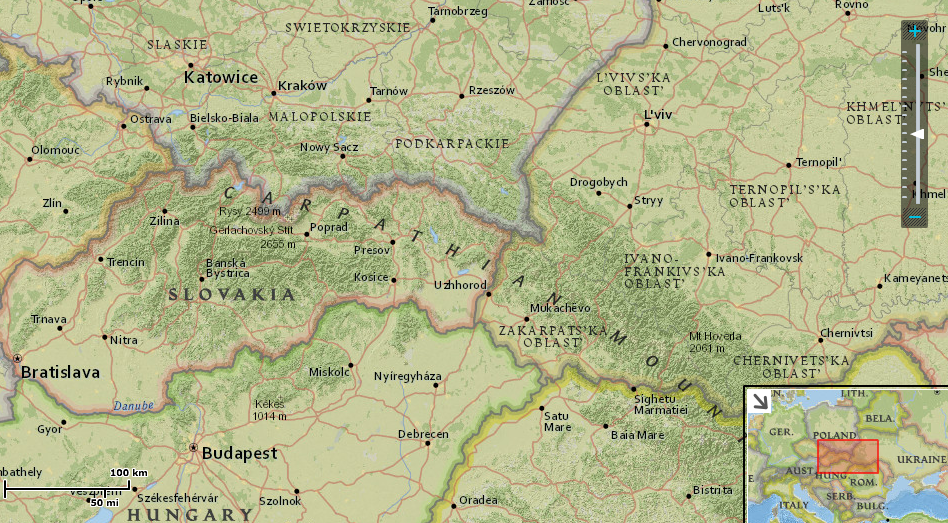 It’s been some time since I actively engaged in genealogical research. It’s not that I’ve lost interest in the topic. My family history project has simply entered another phase, and interviews, transcription, and planning take up most of my time nowadays.

This week, however, I decided to try out JewishGen.org, a site specializes in genealogy for people with Jewish ancestry. I’m glad I did. In just one day, the site cleared up a little mystery about my family that has lingered for generations.

JewishGen provides access to thousands of databases (forgive me for paraphrasing the site’s Who We Are page), providing a research portal for researchers and historians with an interest in Jewish genealogy. The site is affiliated with the Museum of Jewish Heritage – A Living Memorial to the Holocaust, and it emphasizes the lost world of Eastern European Jewry: my ancestors, as it happens. I don’t mean to be plucking heartstrings here. My family left the area long before the Holocaust. We did not lose anyone in that great tragedy.

On login at JewishGen, I was directed to the  JGFF—the JewishGen Family Finder. It’s an interface that helps you build a query against the site’s collection of databases.

First I saw this welcome page. Click the image if you’d like to take a closer look. 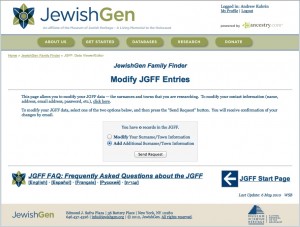 Then I saw the query builder. Again, click the image to take a closer look. 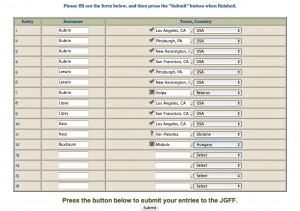 In technical terms, the query builder assembles a series of Boolean AND queries for surnames and towns of interest, joined by OR statements. For example:

At first I entered basic queries against my father’s and mother’s surnames and the cities my family has lived in since it immigrated to the United States in the late 19th and early 20th centuries.

Then I began to feel adventurous. I entered Kubrin AND Volpa, Belarus, the probable hometown of my great-grandfather Harry Kubrin. I also entered Katz and Var-Palanka,  Ukraine, hoping to find information on my mother’s grandfather, Isadore Katz. 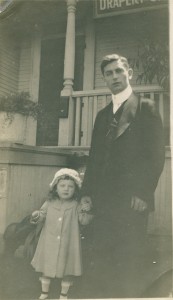 I never met Baba, as he was called, because he died while I was in my mother’s womb. Still, I’ve heard a lot about him. An upholsterer and amateur fisherman, he was said to be taciturn and gruff. He spoke German at home. He ate quickly and in silence. He enjoyed a glass of schnapps in the evening. He suffered from diabetes, which gradually ruined his health. I’m named after Isadore in that oblique way we Jews have of memorializing our dead. My middle name is Ira.

According to family legend, Baba was born in a village called Var-Palanka, but no one has ever known precisely where that was. We thought—but what did we know, really?—that Baba’s village was part of Hungary at the time of his birth and that he had accordingly carried a Hungarian passport when he immigrated, but we weren’t sure about any of these things.

What we did know for certain was that Var-Palanka, a small, obscure place even in its heyday, no longer existed. The Nazis razed it in World War II. You can’t find it on any modern map. We weren’t even sure how to spell it. One version of the family legend places it in the erstwhile Sudetenland, perhaps because of Baba’s German. But I have always had my doubts on this point. I once spotted a Var-Palanka or Varpalanka in an antique atlas in the Los Angeles Public Library, but the book was old and fragile, and the librarian would not let me photocopy the page. My geography is hazy, and I could not guess in which country Var-Palanka would currently be located, if it still existed. All I could do was jot down the village’s approximate coordinates.

I had a vague idea that the site of Var Palanka lay in modern Ukraine, so I entered my query that way. But the JewishGen search engine uses only modern place names, so it rejected my query anyway, displaying this notice in response:

After noodling around on the Internet a few minutes, I found more info on Var-Palanka, including this entry at the JewishGen Sub-Carpathia SIG. The Hungarian spelling is (or was) Várpalánka. It was situated in the Sub-Carpathian Mountains in what is now southwestern Ukraine. The town of Mukacheve occupies the site today.

That was on Thursday. On Friday I received an email from Warren Blatt at JewishGen, advising me of the following:

I entered this correction to my query on Friday evening. Although it has not yet yielded any new information, I am optimistic that I will soon learn more about my family origins.

In any case, I now know the birthplace of my great-grandfather Isadore Katz. He was born in a village called Várpalánka, which is now a place called Palanok, in Mukacheve, Ukraine.

Another piece of the past comes to light.