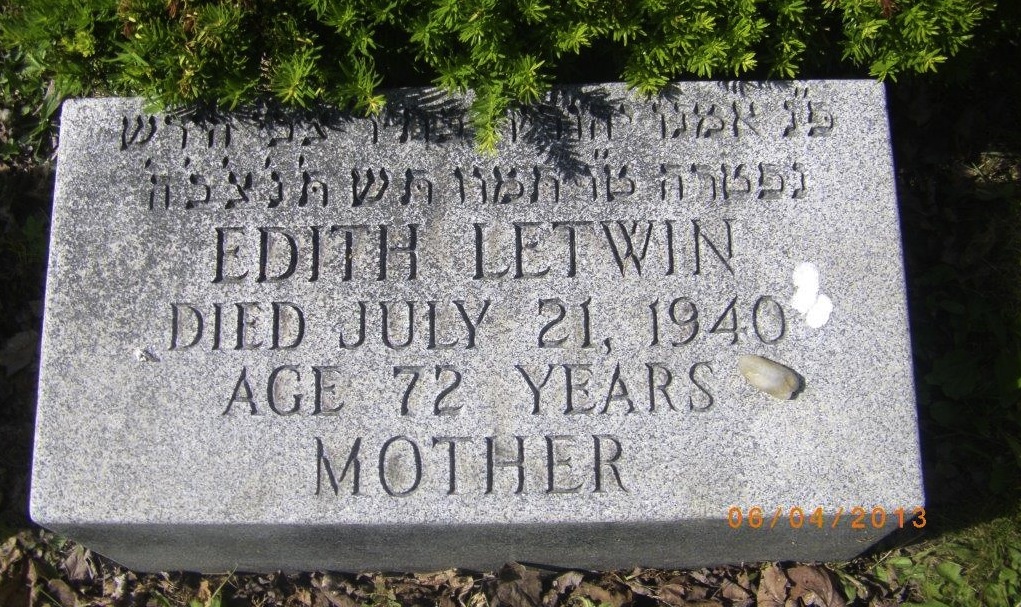 I had a breakthrough recently in my genealogical research. I had been searching for information on my great-grandmother, Edith Letwin, and her children. Edith was my paternal grandmother’s mother. I’ve written previously about her and my great-grandfather, Joseph. My uncle, Jay Kubrin, vividly recalls her death and funeral, which happened when he was a child and touched off a bitter fight with his sister, my late Aunt Phyllis. Jay couldn’t remember exactly when Edith died. And nothing piques the mind so much as a mystery. So I became determined to uncover this one fact.

These days, it’s usually easy to find out when someone died. State and county governments supply birth and death certificates for a small fee. Web sites like Ancestry.com, FamilySearch.org, and FindAGrave provide access to searchable databases housing records of your ancestors’ vital events, travel, military service, and more. For Jewish families, JewishGen.org is particularly helpful. Its Jewish Online Worldwide Burial Registry (JOWBR) contains information on Jewish graves worldwide. In some cases, JOWBR even has a picture of the gravestone.

Yet these resources were not helpful in determining Edith Letwin’s date of death. The Pennsylvania Department of Health could not provide a death certificate for Edith because I did not know the year of her death. The online databases yielded almost no information. JOWBR had information on Joseph Letwin, who is buried at Beth Abraham Cemetery in Pittsburgh. But it had nothing on Edith.

I finally found what I was looking for when I learned, via the family grapevine, that Edith is buried at Beth Shalom Cemetery in Pittsburgh. With this information, it was a simple matter to contact Congregation Beth Shalom, which operates the cemetery. The Cemetery Director, Lonnie Wolf, graciously emailed me photographs of the Letwin family monument and the grave markers of Edith, Meyer, Harry, and Harry’s wife, Evelyn. 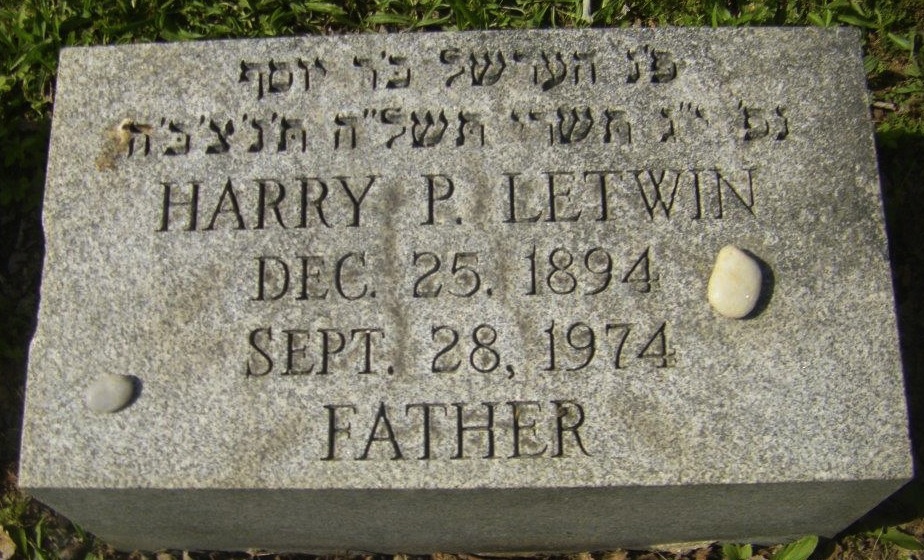 I opened the JPEGs immediately to check the dates on the grave markers. I was so excited I saw nothing at first but the dates. But then I noticed the stones. Edith’s marker had a small pebble sitting on it. Harry’s had two. So did his wife Evelyn’s. Only Meyer’s grave had no stones.

I was touched to see that someone still visits the graves after all these years. I don’t know who it is. It could be Harry’s and Evelyn’s children, come to honor their parents and their grandmother. I don’t know why Meyer’s grave has been neglected, but he was a difficult man and may not be fondly remembered.

Curious, I went looking for more information on this odd Jewish custom of putting stones on our graves. Rabbi David Wolpe, writing at My Jewish Learning: Putting Stones on Jewish Graves, says that to many Jews, placing flowers on graves smacks of an ancient pagan custom. He writes further  about the great significance that stones have in Judaism. The first altars were made of stone. Abraham took Isaac to be sacrificed on one, the even hashityah, or foundation stone of the world. The most sacred shrine in Judaism, the wall of the Second Temple, is a pile of stones. 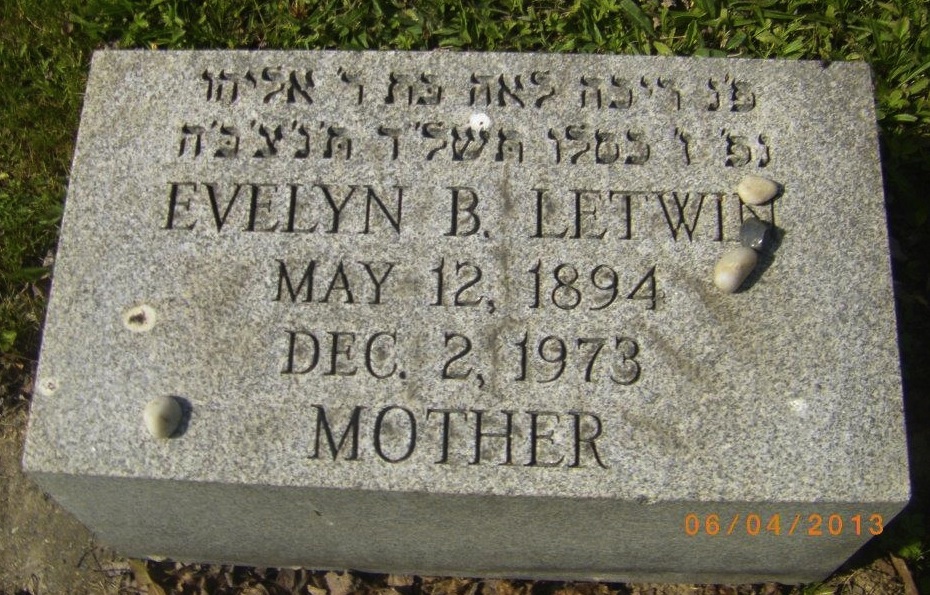 Rabbi Wolpe also traces this custom to a superstition among Eastern European Jews. The souls of the dead were thought to be restless, prone to escape from their tombs. The living naturally regarded these ghosts as unsettling and dangerous. Even those who had been benign in life—the grandfather with the twinkle in his eye, the kind shop owner who handed out penny candy—were thought to be capable of great mischief if they were again allowed to walk among the living. The stones placed on the graves were meant to weigh these souls down and keep them in their tombs.

Rabbi Tom Louchheim, in Question: Why do we place pebbles on grave stones?, states forthrightly at the outset that there is no clear answer to this question. He goes on to cite the midrash Lekha Tov, which asserts that each of Jacob’s sons placed a small stone on Rachel’s grave to construct her tomb. He adds that in the days before marble and granite tombstones, mourners placed a cairn of stones over a grave, fulfilling the mitzvah of matzevah, or setting a stone. The stones we place on our graves today recall this ancient custom. Rabbi Louchheim also alludes to the belief that placing stones on our graves prevents the soul of the deceased from escaping, noting that the weight of many small stones equals that of one great boulder.

The site My Jewish Learning also interprets the stone custom in Ask the Expert: Stones on Graves. It explains that during the time of the Temple in Jerusalem, the stones were placed to warn the kohanim, or members of the priesthood, who became ritually impure if they passed within four feet of a corpse. Rabbi Louchheim also cites this ancient custom as a source of our modern one. This article also cites the popular belief that stones on graves weigh down the souls of the deceased, preventing them from escaping, while adding that the stones are also believed to seal the graves against the intrusion of devils or golem.

Every source I checked cites the permanence of stones as a reason for placing them on graves. Flowers may wilt, but stones last forever, paralleling memory in their durability. All of these sources also associate stones with status, equating the number of stones on a grave with the number of visitors and the depth of the love they hold for the deceased.

Everything I know about the Letwins I know from Jay, who is now the only person to remember them. He recalls Edith as a great beauty and a sweet, gentle soul. It was Edith who coddled the children, handing out nickels and candy. It was Edith who supported the family—by plucking chickens, no less—after her husband, Joseph, was permanently disabled by a mysterious illness.

Her sons Harry and Meyer were completely dissimilar, as siblings often are. Harry achieved fame as a civil servant, trustee of Congregation Beth Shalom, Democratic Party activist, and president of B’nai B’rith: a ganze macher, as my ancestors would have put it. 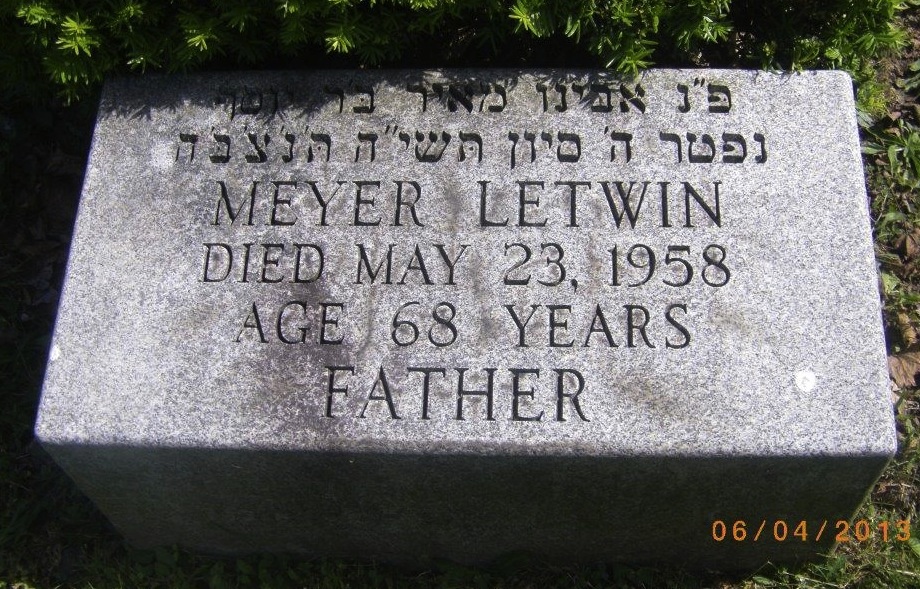 Meyer achieved notoriety as an arsonist, alcoholic, and wife beater. Acting as part of a ring, he was convicted in 1928 of conspiring to torch the millinery shop of Mrs. Carrie Deverts. Foregoing her share of any insurance payout, Mrs. Deverts turned state’s evidence, resulting in a lengthy, highly publicized trial. (You can follow the story  in the Pittsburgh Press and Pittsburgh Post-Gazette by clicking this Google Archive link.) Meyer received a 6-to-12 year sentence in Western penitentiary, but was released following a tearful appearance by his daughter Eleanor before the state board of pardons.

After his release, Meyer apparently lived in relative quiet on Pittsburgh’s Murray Avenue. He may have had a fondness for spirits—Jay, who apparently bears a strong resemblance to Meyer, recalls seeing him passed out at Aunt Fannie’s kitchen table. Meyer married twice, divorcing both times. He represented himself in his second divorce trial, denying that he struck his wife and took the “heavy” money from the register at their tavern. It’s a pity that no one places stones on this man’s grave. If ever there was a soul that needed weighing down, it’s Meyer’s.