“Come see what your imbecile son is doing” 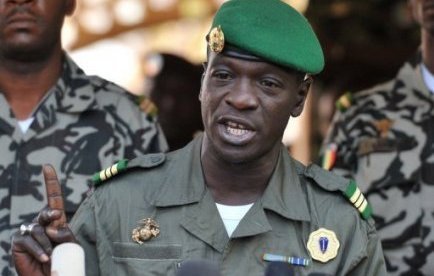 On March 21, the government of Mali was overthrown, and chaos descended on this West African nation of 15 million people. The origins of the coup lay in interlocking crises of rebellion, drought, famine, and the Arab Spring currently roiling the Mideast. Its resolution, which may depend on the military forces of Mali’s neighbors and those of outside powers, cannot be foreseen at this time. But an Associated Press article on Amadou Haya Sanogo, the obscure Army captain who led the coup, brought the whole affair into sharper focus and showed me how family history can sometimes cast a light on history in general.

I’ve been following developments in Mali because I have a consuming interest in this part of the world. I spent a year in West Africa in 1987–1988, traveling through Ivory Coast, Burkina Faso, Ghano, Togo, Benin, Nigeria, and Niger. I developed close friendships with local families during this time and have maintained these ties over the years. In 1994, I went back to the region, returning to Burkina Faso before traveling on to Mali and Senegal. In Burkina Faso, I visited with the Diawara family of Ouagadougou. In Mali, I visited with the Traoré family of Bamako, former neighbors of the Diawara clan.

I won’t say too much about the coup itself. You can learn about it from this Wikipedia article or by reviewing New York Times coverage of the coup and related events. You can also gain a more intimate view from Bruce Whitehouse’s excellent blog, Bridges from Bamako.

But I will say that the crisis is greater than many Americans realize. The coup grew out of a protest against the government’s handling of a rebellion in the northern half of the country, but it only accelerated the events it meant to forestall. In the wake of the coup, the Army collapsed, leaving the field to Tuareg rebels and Ansar Dine fighters affiliated with Al Qaeda. Mali’s neighbors in the Economic Community of West African States (ECOWAS) are working to restore order. The European Union is watching the situation closely. The U.N. Security Council is weighing ECOWAS intervention. The United States is watching from the sky, operating drone flights over northern Mali from a not-so-secret base in Ouagadougou. The first drone strike may already have occurred.

But coming back to Captain Sanogo and his family … On the morning after the coup, the captain’s father, Mamadou Sanogo, rose early at his home in Segou, Mali, and switched on the television. At first he kept the volume low to avoid waking his wife, but something he saw on television rattled his composure. Gaping in astonishment, the old man recognized his son, seated with a group of soldiers and announcing the coup d’état. “Come see what your imbecile son is doing,” he cried, shaking his wife awake. Madame Sanogo refused at first to believe that her son had led a coup d’état. But when her nephew confirmed this truth for her, she grew hysterical, then fainted.

I’m appalled by the events in Mali, but as a family historian, I admire this vignette. It links the intimate and familiar (a man watching TV and complaining about his son) with the sweeping and panoramic (troop movements and deliberations in the U.N. Security Council). One simple line (“Come see what your imbecile son is doing”) reveals much about the dynamics of this family—the tension in the parents’ marriage, the generational strife between father and son. Madame Sanogo’s hysteria illustrates the shock we feel when our view of a loved one collides with fresh events. Finding her life and her country irrevocably altered—and her son at the center of the crisis—she collapses under the strain.

This moment in the Sanogo family may illuminate some of the psychological forces behind Captain Sanogo’s assumption of power. One has to tread cautiously, of course, in making interpretations based on scant evidence. Yet the strife in the Sanogo family suggests generational competition as a factor in Mali’s power struggle. Two events in particular come to mind.

Sanogo’s coup apparently began as an isolated mutiny when a group of soldiers chased off the Minister of Defense, who had come to address them at their barracks. Seizing the moment, Sanogo rallied the mutineers, then descended on the presidential palace, intending merely to scold the president, Amadou Toumani Touré. But Touré had fled, abandoning the seat of government to Sanogo and his soldiers. So an impromptu uprising by a small group of soldiers snowballed into an overthrow of the constitutional order.

In the weeks following the coup, ECOWAS mediators applied pressure to the government and the junta, forcing Touré to resign and a reluctant Sanogo to yield power. Dioncounda Traoré, the Speaker of Parliament, was appointed interim president, but he did not hold power for long. On May 21, pro-coup demonstrators stormed the palace, assaulting Dioncounda Traoré and beating him unconscious. Traoré subsequently sought medical treatment in Paris, where he remains to this day. The presidential palace sits on an easily defended hillside in Bamako. The Army controlled the city, and Sanogo controlled the Army. Most observers believe he could have prevented the demonstration and assault had he chosen to do so. But he did not, perhaps seeing  Amadou Toumani Touré in the first instance and Dioncounda Traoré in the second as stand-ins for his father.

The family tableau is engaging because it shows the individual in relief. Seeing the scorn of Sanogo père, we arrive at a greater understanding of his son. When the son becomes an actor in a global drama, we gain insight into that drama. The crisis engulfing Mali has many causes, of which some are complex and others mundane. A glimpse of an old man watching television tells us how to read family history, and why.

The History in My Family #1