At Play in the Archives of the Los Angeles Superior Court 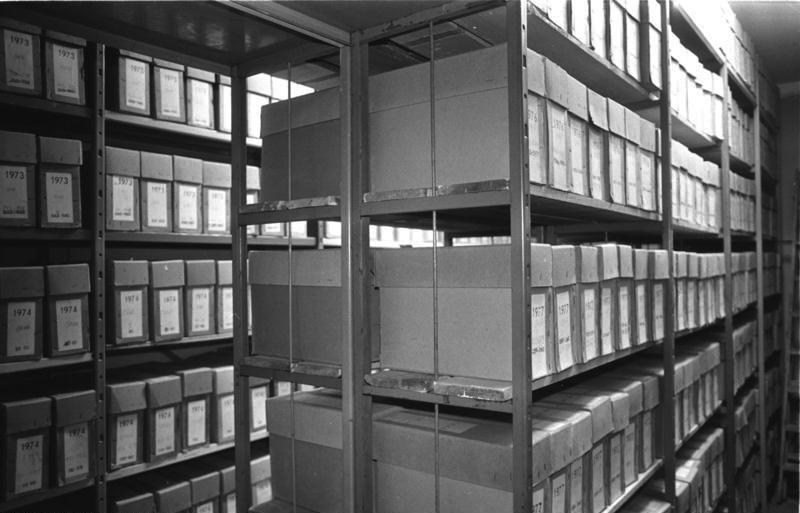 I went to Los Angeles last month to research a few things in my family history. My primary goal was to learn more about a business dispute involving my father and grandfather in the mid-1950s. This goal led me to the Archives and Records Center of the Los Angeles Superior Court.

I first visited Archives and Records last summer, and I wrote about it at the time in a state of wonder and frustration. The Center is a strange, gloomy catacomb of vast historical resources and manifold difficulties. The place is opaque to outsiders and even to many of its employees. The only way to learn this system is by trial and error. The best advice I can give you is to arrive early and be patient. Try also to suspend your bodily functions while you are there. If you must use the restroom, you’ll have to go to the Microfilm Library in Room 110 and ask for the key, which is attached to a large, bent cooking spoon. To obtain this beauty, you must surrender some form of photo ID to the clerk behind the counter, who snatches up a tissue to grab the offending hardware and hands it to you with a withering glare. I drink a lot of coffee, and her displeasure with me grew throughout the day.

But don’t let this unpleasantness distract you from the treasures of history buried in this tomb. These archives date back to 1880—a short time by the standards of some cities, but long enough by the standards of Los Angeles. Criminal cases, civil suits, divorces, probate proceedings and more are recorded on countless microfilm reels and in dusty ledgers. It takes determination to locate these treasures, but the findings will amaze you.

My search began in Room 212, two floors below ground level. Scanning microfiche, a clerk located the case index for my father’s 1956 lawsuit, then sent me upstairs to Room 110 to request the reel. The Microfilm Library is a peculiar place. Usually there is no one behind the counter, so you take a number, write your name and case index in the log book, then take a seat in the hallway to ponder the workings of bureaucracy. Kafka would be right at home in this place. So would Beckett and Sartre. The hallway is dark and dilapidated. Other members of the public wait there for their files, yawning, thumbing their touchscreen devices, and rolling their eyes in broad satirical gestures whenever an employee appears. It pays to engage in small talk, because many of these people have experience in this system and know how to work it. Still, an atmosphere of pent-up frustration is pervasive. Any clerk who appears in that hall is instantly besieged.

I spent three days at Archives and Records. On the first day, after I found the case index number and experienced a surge of elation, I waited for two and one-half hours in the hallway outside the Microfilm Library before being called by a taciturn man with bent posture, who seated me at a broken machine and handed me the wrong reel of microfilm. These deficiencies were not immediately apparent, because I did not know how to work the machine anyway. The clerk moved me to a working microfilm reader and showed me how to use it, but I could not make him understand that he had given me the wrong reel of film. It took a second clerk to straighten out that snafu.

The difficulty in locating microfilm is understandable, however. Los Angeles is a large county with several million inhabitants. As I mentioned previously, the Court archives date back over 130 years. That adds up to a lot of files. Each file bears a six-digit number with an alphabetical prefix to designate the file type: C for civil, CR for criminal, P for probate, etc. The Municipal Court uses a similar system, and the archives are commingled. What is more, any number can be used three times within a given file type, an arrangement that yields (for example) three different civil cases with the same file number, with only the date and the names of the parties to the lawsuit producing a definitive identification. This scheme results in endless confusion, presumably in both filing and retrieval. On the four occasions I asked for microfilm, I received the wrong reel three times: an error rate of 75 percent. Some reels are undoubtedly lost. Historical resources are fragile, and they don’t last forever.

Even when I was given the correct reel and seated at a working machine, I had other trouble. Microfilm is difficult to use. Pages are copied upside down, sideways, and backwards, and at varying levels of magnification. One stretch of film might hold two columns of pages, another just one. You constantly adjust rotation, focus, and zoom. The lenses are dirty, the machines maladjusted. Reading and printing a file is a tough, laborious process.

Still I persisted, having come all the way from Canada on this quixotic errand, and in the end I was rewarded with a file of 50 pages and a bill for $25. Filled again with elation, I paid the bill, retrieved my file, rode the Metro to midtown, where I drank another coffee and immersed myself in my findings. The papers illuminated an old family mystery. I saw the arc of this lawsuit in its complaint and cross-complaint, its demurrers and amendments, yet one thing brought me up short. The case had no resolution. Although a trial date had been requested, none had been set, and no record of judgment was visible in the file.

I returned to Archives and Records the following day, determined to retrieve this missing element. I began in the Microfilm Library, planning to review the file and see if I had missed any pages, but after the usual comedy of error and delay, I abandoned this plan. I had been thorough on my first visit and was quite certain I had printed the entire file. Besides, a chance conversation with another habitué of this sad demimonde revealed the existence of a separate judgment file, which was only available in Room 212. The clerk at the door directed me to a counter at the back, where a man named Marvin listened soberly to my request and strode off in search of the file. I sat down at a long narrow table beneath a bank of fluorescent lights and waited for Judgment.

Marvin was new on the job, but intelligent and thorough. He looked everywhere for the judgment file, working through his lunch break and consulting his supervisors, but he could not find it. I have to hand it to him for his dedication. Sometimes the only way to preserve your dignity in a broken system is to assert yourself against it.

I spent the following day at the Los Angeles Public Library, scrolling through its trove of microfilm for a news item related to my father’s case. I did not find the article, but I was becoming inured to this sort of failure; in fact, I was becoming positively stimulated by it. Adversity has a strange tonic quality, a pang of longing that stiffens resolve and arouses a creative stubbornness in an otherwise reasonable man. I wanted the judgment to my father’s lawsuit, and if it existed, nothing would stop me from finding it.

So I returned to Archives and Records and made one last attempt to complete my research. A woman named Narda helped me this time. I recognized her from my previous visit; she was the one person out of four who had handed me the correct reel of microfilm. Narda is an alert and intelligent woman, and she exerted herself mightily in this search. She began by retracing Marvin’s path, looking for anything he had overlooked, but she found nothing. A supervisor directed her to Room 303, where she moved a mountain of dusty boxes perched atop a filing cabinet, to no avail. Then she sought a key to a different room in this subterranean warren, but another manager held that key, and she was in a meeting, so Narda was obliged to wait, as was I.

I took a seat at the long narrow table and busied myself with some papers. An hour passed, and then another. People began to notice me. Clerks would gesture in my direction and put their heads together, whispering. I felt serene, stimulated, and fully alive. It is invigorating to exert your will, vitalizing to reach for an object of fascination. Narda stopped by periodically to update me on her progress. The manager with the key was still in her meeting. Then the key was found, but the room it unlocked did not contain the missing file. Narda’s supervisor told her to tell me that the file was lost, but Narda would not do that. She called a different supervisor who was at home that day and asked for additional directions. I heard frustration in her voice. Taking her hand, I told her how much I appreciated her resolve and thanked her for pressing ahead with this search. We had become partners in this enterprise.

Narda returned an hour later, beaming. She had found the file register—a simple, handwritten list noting the date and contents of every item in the file. Scanning the page, I saw quickly that I had retrieved all information related to my father’s lawsuit on my first day at Archives and Records. There was no more information to be found. There was no resolution to the case. It had been abandoned without judgment.

Thanking Narda, I gathered my things and rode the battered elevator up to the strong daylight flooding the street. I felt immense satisfaction. I had come up against a stubborn, inflexible system and by some combination of will and finesse, forced it to yield. It’s human nature to avoid difficulty and seek the easy path, but sometimes difficulty is exactly what you need.