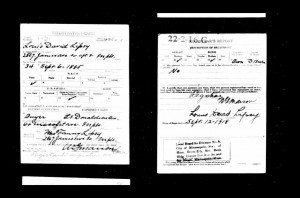 I said recently in What Is Family History? that genealogy is not, for me, the driving force behind family history. For me, the factual stuff of my chronicle—the places and dates, the presence of my ancestors’ names on census forms and ship manifests—is subordinate to character, relationships, and the overall impression of family life. History is more than mere pedigree.

Still, you can’t write a family history without recourse to genealogy. Genealogical research can yield hard facts, and facts are essential.

Without facts, you might find it difficult to imagine the character of someone who lived two or three generations ago.

Without facts, you might wander off course, led astray by the fallible memory of your family members.

Without facts, your chronicle might be thin, gauzy stuff without credibility or verisimilitude.

I first turned to online genealogy when an inquiry I filed with the Los Angeles County Registrar-Recorder/County Clerk, guided by dates supplied by my mother, failed to find any record of the birth or untimely death of my uncle David Lipsy. My mother, it turned out, was several years off in her estimate of when her brother had lived and died. She thought his entire lifespan fell somewhere in the 1930s, but on this point she turned out to be mistaken.

At about this time, I spotted an online ad for ancestry.com. I set up an account on the site, logged in, and began searching its databases. I soon found I had discovered a trove of priceless information.

The site lets you search for a wide variety of information. You can search census records, birth, marriage, and death records, military records, newspapers, and specialized history archives, such as the site’s Jewish Family History Collectionor its African American Family History collection.

The artifacts you can find are startling. Using ancestry.com, I have traced my relatives’ movements through census forms, voter registration lists, and ship manifests. I have learned, for example, my great-grandfather’s address in St. Louis in 1910 and in Los Angeles in 1920. I have learned that he sailed into Los Angeles from Hong Kong on December 11, 1929, returning with his family from a grand tour through Europe and Asia. I have even found an image of his World War I draft card.

Possessing these facts is one thing, interpreting them is another. Using an address from the 1920 census, I visited the home where my great-grandfather lived, where my grandfather grew up. Standing on the sidewalk outside, I took in the large, imposing house, the vast expanse of lawn, and the wrought iron fence encircling this veritable mansion. My great-grandfather, I realized, was a wealthy man.

I also noted the bay window of the upstairs bedroom, the room in which my great-grandmother lay on her sickbed as she succumbed to kidney disease, and I thought of the storm of emotion that must have broken over my grandfather, then an adolescent, as he watched his mother waste away.

Similarly, it was interesting to peruse those voter registration rolls, which held the names of my great-grandfather, his brother, and in-laws. They never missed an election, and they always voted Democratic—a typical voting pattern for Russian Jews, who, having experienced oppression in czarist Russia, embraced American liberalism.

For the moment, my genealogical research is on hold. Using the resources I found on ancestry.com, along with documents from the registrar-recorder’s office, newspaper articles I found in the Los Angeles Public Library, and my mother’s enormous trove of letters, photographs, and other memorabilia, I feel I have pieced together a whole and credible account of my maternal ancestors in the opening decades of the twentieth century. If you read this chapter of my manuscript, you will know, as much as anyone can know,  how they lived and what they felt.

Still, I realize I could learn a great deal more about my family history. Ancestry.com is not the only resource for genealogical research. There are other web sites, such as familysearch.org and genealogy.com. There are also scores of archives in libraries and government institutions. Finally, each family has its trove of memorabilia.

So I open this question up to you.  Family historians, what resources do you use?  And how do you make use of what you find?