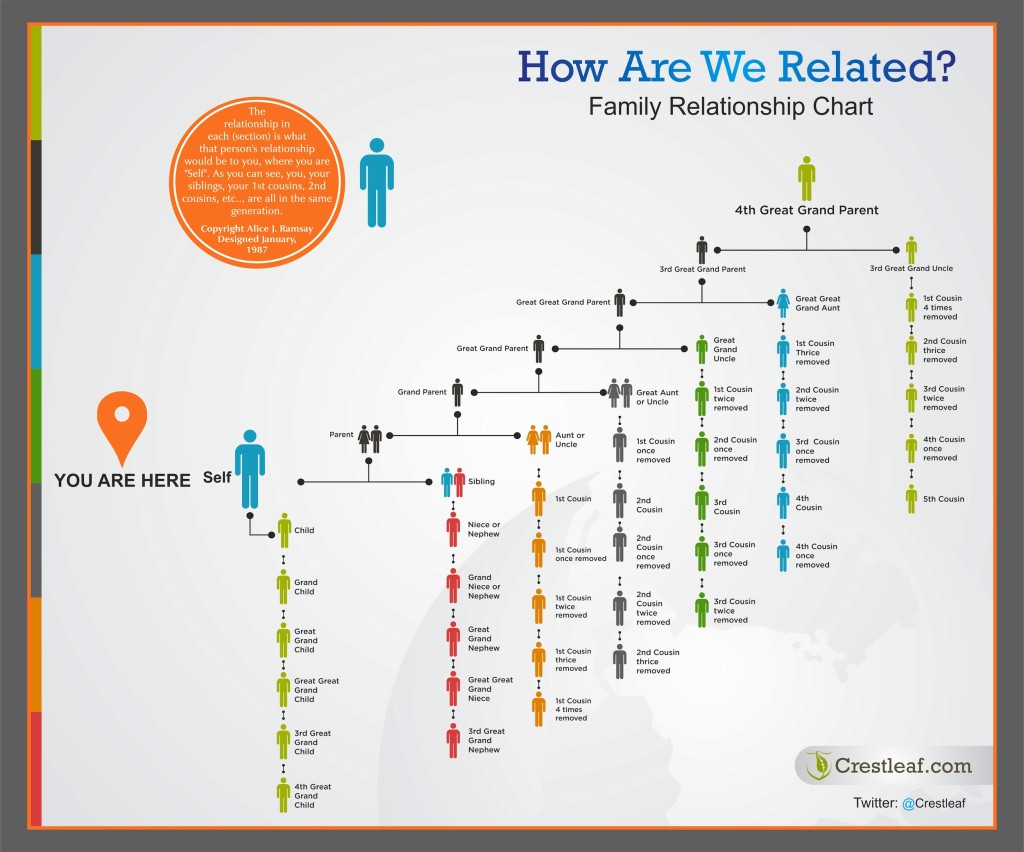 One of the nice things about a family history blog is that you occasionally hear from a relative you never knew you had. I had just such a pleasant surprise a few days ago when an email from Tony Kubrin landed in my inbox. Tony was looking at my web site when he noticed that some of my relatives bore an amazing resemblance to his relatives.

On closer examination—and a comparison with his father’s photo albums—Tony realized that his relatives and mine are actually the same people. Tony’s grandfather, Jerry Kubrin, and my grandfather, Sam Kubrin, were brothers. That means Tony and I are second cousins. Hi, cousin.

By the way, if you have trouble keeping track of kinship terminology or distinguishing your first cousins once removed from second cousins, this handy family relationship chart from Crestleaf (shown above) provides a convenient reference.

Tony lives in Chandler, Arizona, and works in property management. His parents, Stephen and Susan Kubrin, live there also. (Stephen is my first cousin once removed, if you’d like to practice your kinship terminology.) I’m eager to see what I’ll learn from this branch of my family, but Tony has already cleared up one mystery for me. 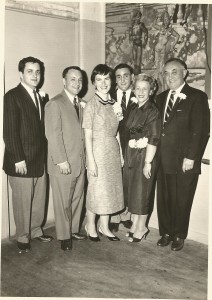 I have a picture of my parents, uncles, and grandparents hanging in my living room. I believe my grandmother, Rae Kubrin, gave it to me some years ago.

From casual observation, I can tell this photo was taken in the 1950s. My parents and grandparents are smiling broadly. My uncles Jay (at far left) and David (third from right) wear more tentative smiles, which I kind of admire. There’s nothing so perfunctory as a thousand-watt smile.

My elders are posed in front of some sort of tapestry or painting. They’re all dressed to the nines, so this photo was clearly taken on a formal occasion. But what occasion?

I now know that the occasion was Stephen Kubrin’s bar mitzvah, which was held in Los Angeles in 1957. Tony sent me three photos in his first email, and one of them—identical to the picture hanging in my living room—was taken from his father’s bar mitzvah album.

Tony’s grandfather, Jerry Kubrin, worked with my grandfather (Sam) and my father (Merwin) in the family business. That was the Walking Man, which distributed flyers door-to-door throughout Southern California. Jerry also ran a separate distribution company out of the same warehouse.

Advertising distribution is a tough, tough business. The Walking Man has generated many stories for my family history—about difficult customers, the gritty Skid Row environment, and the cast of colorful characters who have worked there. The business still exists, and is still held by my family. A cousin runs it today.

I vaguely remember Jerry, who died in 1963. He was bald. He seemed tall to me, but, of course, I was only a child. I remember him as kindly, although I don’t know why he made this impression on me. His death must have come as a terrible shock—he was only 50 years old.

When Jerry died, my Uncle Jay was drafted into the business on short notice, and he spent the rest of his working life there. Jay is retired now, but he still covers for my cousin occasionally, 52 years after he first entered the business. Thanks to the Walking Man, Jay had his moment of fame in 1995, when the Los Angeles Times profiled him in its Working People column.

I also remember that my father was deeply upset when he heard that Jerry died. I have a memory—just an image, really—of my father walking out of the house and down the walk, inconsolable. It was the first glimpse I had of adult vulnerability. To my mind, this is the stuff of family history—those moments of shock, grief, or delight that reveal us in all our complex humanity.

Thanks for checking in, Tony.